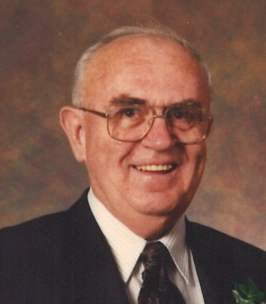 Sadly, Ken passed away after a brief illness. He is survived by his wife of 63 years, Shirley (nee Tate). Mourning his passing are his children, Jon and his wife Carolyn of Calgary, Alberta; Richard and his wife Kris of Leamington; Sharon and her husband Ron Jones of Kingsville. Grandfather of Amanda, Dylan, Lucas, and Rebecca. The youngest of three, Ken was predeceased by his brothers Gordon and Dave. Also left to remember Ken are several nieces, nephews and extended family and friends.

Born and raised on the family farm in Kent County, Ken moved to Leamington to open Leamington Glass in 1959. He owned and operated it for over 50 years before his son took over the reins. He supported and sponsored youth sport in Leamington and enjoyed opportunities to work with the Flyers hockey alumni. He could often be found in the kitchen during charity fund raisers putting his well-known culinary skills to good use. His wry sense of humour brought many a laugh. He will be greatly missed by family and friends.

A private family burial will take place at Church of the Epiphany Cemetery. A summer celebration of Ken’s life is planned for friends and family. Arrangements entrusted to Kendrick Funeral Home, Kingsville.

If you wish, memorial donations would be appreciated to Erie Shores Health Foundation, 197 Talbot St. W., Suite 210, Leamington ON N8H 1N9 or to a charity of your choice.