To share your memory on the wall of Hilda Sim - Kingsville Celebration Centre, sign in using one of the following options:

Donations are being accepted for: KINGSVILLE HISTORICAL PARK INC.

We encourage you to share your most beloved memories of Hilda Sim - Kingsville Celebration Centre here, so that the family and other loved ones can always see it. You can upload cherished photographs, or share your favorite stories, and can even comment on those shared by others.

Posted Feb 01, 2020 at 11:34am
We loved hilda at our apartment building n we will miss her when we play dice again. She was lively at the age of 99.
Comment Share
Share via:
AK

Posted Feb 01, 2020 at 10:50am
Our condolences to the Hilda's family.......we will miss her here at the Legion Estates......she and Alice sat together in their wheelchairs for Tues night teas and we're good friends and it was always a pleasure for me talking to her.....she has earned her rest.....Alice & Rick Klassen
Comment Share
Share via:
J

Posted Jan 30, 2020 at 08:53am
On behalf of Quilts of Valour Canada, our most sincere condolences to Jacqui and all of Hilda’s family. Janet Bergeron, QOVC rep for Windsor/Essex
Comment Share
Share via:

Posted Jan 30, 2020 at 06:25am
Hilda was the sweetest,kindest,friendliest lady. I have the greatest fond memories of of her.Rest now Hilda your work is done. 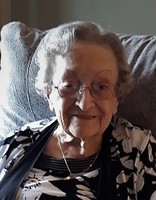